Beer: It will cure what “ales” you!

Ale, pale ale, IPA, lager…what’s the diff? Here’s a simple guide to understanding some of the most popular types of beer. Most of our beers fall into one of two categories, ales or lagers.

Ales originated in England more than 5,000 years ago and are made with lots of hops and malt, which give them more of a bitter taste and darker color. They’re usually aged just a few weeks.

Lagers, on the other hand, originated in Central Europe just a few hundred years ago and are aged for much longer, typically months at a time. They tend to be lighter in color with milder taste and fruit flavors.

There are lots of great resources to learn more about all of the different types of beer. Here’s one with a lot of helpful information: http://www.craftbeer.com/beer-styles. Hover over each image for a brief description and a link for more details.

Our favorite way to learn about beer is by drinking it. We’ll be offering tastings at New Castle Liquors soon. Check the website and follow us on Facebook to find out more. 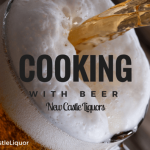